There are results in SDG action!

We decided to provide you here with some good news from the Report. For example, regarding GOAL 1, which targets eliminating poverty on a global scale, among other information, the Report states that the proportion of the world’s workers living with their families on less than $1.90 per person a day declined significantly over the past two decades, falling from 26.9 per cent in 2000 to 9.2 per cent in 2017. Among other good news, there is for example a statement in the report that under-5 deaths have decreased significantly. As this is a very strong indicator of the quality of life and healthcare, for the GOAL 3, ensure healthy lives, there is the statement that globally, from 2000 to 2016, the under-5 mortality rate dropped by 47 per cent, and the neonatal mortality rate fell by 39 per cent. Over the same period, the total number of under-5 deaths dropped from 9.9 million to 5.6 million.

In other areas of actions, there is also improvement. Regarding gender equality (GOAL 5), the percentage of women in single or lower houses of national parliament has increased from 19 per cent in 2010 to around 23 per cent in 2018 on a global scale. Of course, there are a lot of things to improve in each area, but here we decide to present the most positive tendencies. Further good news are that from 2000 to 2016, the proportion of the global population with access to electricity increased from 78 per cent to 87 per cent, with the absolute number of people living without electricity dipping to just below 1 billion. This surely is a great step towards Goal 7, to ensure access to affordable, reliable, sustainable and modern energy for all. It is good that this progress is going simultaneously with the process of implementing measures of responsible consumption and production. By 2018, a total of 108 countries had national policies and initiatives relevant to sustainable consumption and production (GOAL 12).

Finally, for the end of this small encouraging extract from overall data, we must note that, as of 9 April 2018, 175 Parties had ratified the Paris Agreement and 168 Parties (167 countries plus the European Commission) had communicated their first nationally determined contributions to the United Nations Framework Convention on Climate Change Secretariat (GOAL 13).

Related Posts
Copyright GIG-GLOBAL IMPACT GRID 2015 -- All Rights Reserved
We are supporting the Global Survey and kindly invite you to check it out! 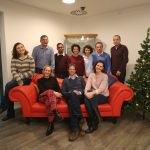 The Kick-Off Meeting of the Project GT4SME, Berlin, Germany